Military service members are entitled to receiving retirement benefits in the form of military pension. While this retirement benefit is similar to private pensions in many ways, it differs in that service members cannot cash out early or borrow from their plans. Ideally, they need to serve at least 20 years or have reached specific points (in the case of National Guard and Reserves) to be entitled to their full pension.

As such, this pension can be a significant asset for a service member. During divorce, former spouses are entitled to part of this pension when dividing assets. Under the USFSPA (United Services Former Spouse Protection Act), courts have been given the power over deciding how the pension will be divided among spouses. Their decision is subject to the family law principles in their specific state. If the court decides that you, as a service member, are entitled to the entire pension, it could compensate your former spouse through other marital assets.

What Does A Pension Division Order Do?

What Is The Best Time To Get The Order?

If you and your spouse want to go through divorce, then you should deal with the pension division issue early. This holds true even in situations where the service member’s retirement is too far in the future. Ideally, your former spouse is entitled to a portion of the pension, and getting a court order will help determine the division of the pension.

It might not be possible to divide the pension if you fail to address the issue during your divorce. However, there is still the option of filing for a motion to divide omitted assets, which is mostly a costly and complicated process. Filing during the divorce eliminates these costs and complications. The best way to start is by identifying the right court for getting your pension division orders.

How to Determine the Right Court For Your Pension Division Orders?

There are two options for determining the right court. First, a former spouse could ask the service member to consent to a court having jurisdiction over their pension division. Most people agree to this to avoid the expense of going through a legal battle. If the service member doesn’t opt for this, then lawyers can be involved in determining the right court for the legal proceedings.

Getting the Pension Division Orders

Once you determine the right court, spouses can use two options to get the order. The first option is pretty straightforward. The two could enter into a written agreement on the best way to divide the pension between themselves. An attorney will then have to draft a proposed order from the agreement to be presented to the court. Upon approval, this will be the order for the two spouses to follow.

The second option will apply to spouses who can’t agree on how to divide the pension. For such situations, the two will have to go to trial for the court to make a decision. The pension could either be divided between the two as percentages or awarded as a specific dollar amount to the former spouse.

However, some former spouses choose to avoid dividing the pension by exchanging the pension amount they are entitled to with cash or specific assets. This option requires the former spouse to understand the present value of the pension they were to receive to ensure they get a fair trade. Often, determining this fair value requires hiring a CPA or pension appraiser with experience in valuing military pensions.

How Direct Pay Is Determined

After receiving pension division orders, the divorcing couple or their attorney should send a copy of the letter to the DFAS (Defense Finance and Accounting Service), which is the government agency in charge of releasing retirement benefits to military personnel. This step ensures that the body knows that the former spouse is entitled to some part of the pension.

However, the divided part of the pension could either come directly from the DFAS or from the service member. For a former spouse to receive direct payments from the DFAS, their situation needs to reach a couple of requirements, including:

Contrary to common belief, if you haven’t met the 10/10 rule, you are still entitled to the division of pension. The court will still make the decision of how the pension will be divided based on its state laws. The only difference is that the recipient will not receive direct payment from the DFAS. Instead, the service member will have to send their former spouse’s cut from their check. While there have been multiple attempts to modify or eliminate the 10/10 rule, most have been futile.

One thing to remember during the whole process is that the civilian spouse will be receiving cash from the service member’s total disposable retired pay. For the total disposable pay to be reached, a couple of deductions have to be made from the gross pension, including debts owed to the government, the amount deducted for the survivor benefit plan, and any fines assessed against the service member. Feel free to contact us if you need help getting your pension division order. 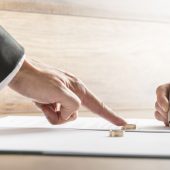